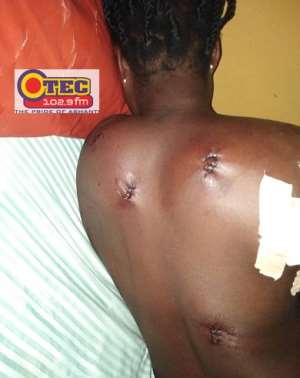 A 32-year-old woman, Ruth Pokuah, has been butchered by a 19-year-old mentally challenged person in her house while bathing at Nkawie in the Atwima Nwabiagya South district of the Ashanti region.

The incident happened on Wednesday, January 15, 2020, at 8pm in the evening when the mentally challenged man who was in chains receiving treatment at Gilga Church at Nkawie, broke the chains, entered the nearby house and inflicted machete wounds on the back of the woman.

The mother of Kyei Baffour Nimako told this reporter that her son was brought to the church on last Monday to receive healing for behaving strangely, a situation they attributed to “spiritual forces” and must be treated “spiritually”.

“When we brought Kyei to the church, Prophet Rabi Boahen put him in chains because nobody could contain him. Just this evening, he broke from the chains, I heard him shouting repeatedly ‘I will kill somebody today’ and entered the house. We followed him to the house and surprisingly, we saw him holding a machete in front of the bathroom,” she narrated.

She continued, “Madam Pokuah came from the bathroom naked screaming and crying, with blood oozing from the back. We quickly rushed her to the Nkawie Government Hospital while Kyei too was disarmed and also sent to the same hospital, where both are been treated.”

Kpatinga Calm After After Chieftaincy Clashes